I've been neglecting the blog because I have a vast array of social media with which to keep everyone updated on our goings on. So I use Instagram and Facebook much more often than blogger. Also because I can update them from my phone, which is nice.

But today I took a ridiculous adorable and also ridiculously long video of Mitch being a baby that I had to post somewhere. And since Facebook and Instagram lend themselves more to short snippets than to longer diatribes and posts, I figured I'd put this here for you. Or for future me. Or neither. But at least is somewhere other than in the backlog of my phone.

You are THREE years old today. Three. The last three years have gone exceptionally fast, but you definitely been a threenager for a few months now.

You are stubborn, determined, and persistent when you want something. And you are realllllllly loud when you don't get what you want. But then, when you're not being those things, you are fun, sweet, generous, and hilarious. Basically, you're sweet and spicy and I wouldn't change you one little bit. Not even when you're screaming at me for taking away the chair you were standing on to bang the buttons on the pool controls. That actually happened yesterday. And you cried for a good 30 minutes.

I went back to look at the last letter I wrote you for your birthday and discovered that I have yet to write a birthday letter for you. And I think that that's one of the reasons you are who you are. You have become the squeaky wheel when you need some grease, and you've had to be exceptionally squeaky with your big brothers and now your little brother around!

Things I want to remember about you:

So many wonderful things to remember, Amy! My hopes for you are that you don't change too much. I think that your stubbornness and persistence will serve you well in the world, but hopefully you'll learn to apply them in more tactful and thoughtful ways! And I hope that you never lose that ability to be vocal about what you need. Too often people, women especially, tend to let themselves be walked over because they're incapable or too uncomfortable to stand up for themselves. If you can speak up in ten or twenty years like you can now, I can guarantee more things will go your way and you will know yourself a lot better than the average person knows themselves.

I love you so much Amy! Sometimes I have to pinch myself because I can't believe you're ours. You are a bundle of spunky energy and I'm looking forward to another year of you keeping me on my toes!

Hi.
Sorry it's been awhile.
I struggle with what to blog about because so much of my life is ordinary and familiar to me that I feel like it would be boring for other people to read. Well, my little brother came to visit his weekend after being away for four months and it made me realize that blogging about the little stuff is okay, because I'm the only person who knows it and it might actually be interesting to someone choosing to come to this blog and read about the life of our family. Right??
So I'll start off with something easy. Amy is nearly one year old now and loves brushing her teeth. Well. Not so much tooth brushing I guess, as the actual toothbrushes. She. Loves. Them. Any and all she can get her hands on she sticks in her mouth. She will get up on the step stool in the bathroom and point at the toothbrushes saying "Ahhh! Dat?!" over and over until I grab one for her. 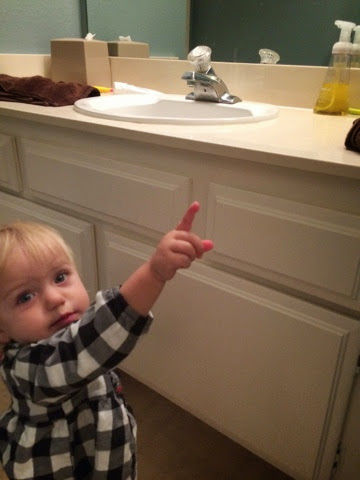 I know. That face. 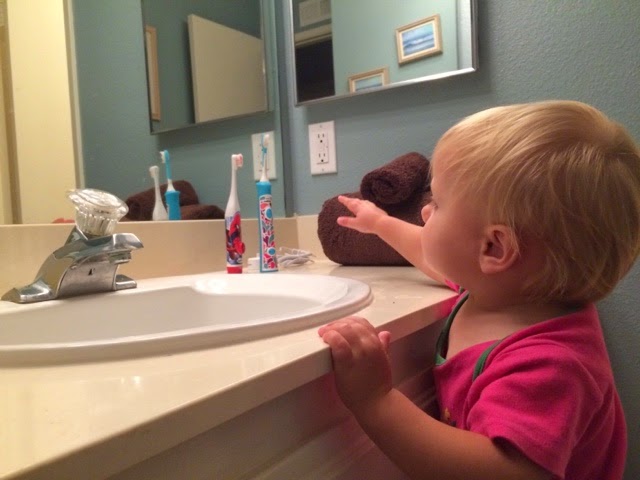 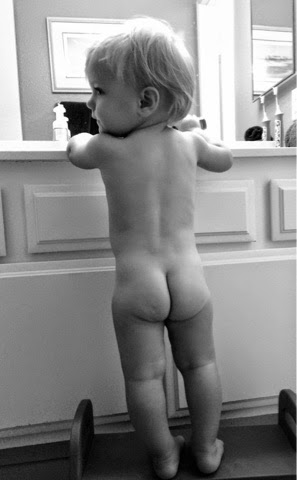 I know. That baby butt. She's actually brushing her teeth in this picture. It's pretty adorable.
Posted by Mama Durso 1 comments

Email ThisBlogThis!Share to TwitterShare to FacebookShare to Pinterest
Labels: Amy Rose, on the daily

Johnny and the neighborhood girl

We live on a cul-de-sac filled mostly with retired couples. There are a couple if families with high school or college-age kids, but mostly, they're people with grown children. Except for one family who has a nine-year-old girl (we'll call her C) and a two-year/old boy.
Johnny is infatuated with C. When he goes outside to ride his bike he has taken to asking, "I wonder if C wants to ride her scooter!" So finally, we went over to her house where I coached Johnny through asking if she should come outside to play. It was adorable.
C's dad: Hi Johnny.
Johnny: uh.... Uh... My bike goes so fast!! It takes rocket fuel!
Me: Do you want to ask if C can come outside?
Johnny: I'm riding my bike! Does C want to ride her scooter?!?? (Spoken at the loudest volume possible.)
C: I have some homework to finish and then I'll come outside.
Johnny: Okay!!
And then C came out and ran around with Johnny and Hank and played along when they "fixed" their bikes and used tools with them. It was adorable.
Until Johnny says, "C, do you want to come in my house and see my stuff?" Before I can step in and say "uh, that's not a good idea" because our house is a MESS, C has said "Sure!" And they've taken off for the door. Whoops.
Since then, I've been trying to talk to Johnny about asking me before inviting people into the house and also not just knocking on C's door whenever we're outside... especially when I'm trying to get packed up so we can go somewhere. Because that's happened.
It's fun to see him want to be around someone and interact with her so effortlessly (kind of). He's been a pretty independent and introverted kid, not liking large crowds and hiding in his room when parties get to be too much for him. Turns out he does enjoy people and is flexing his social muscles. 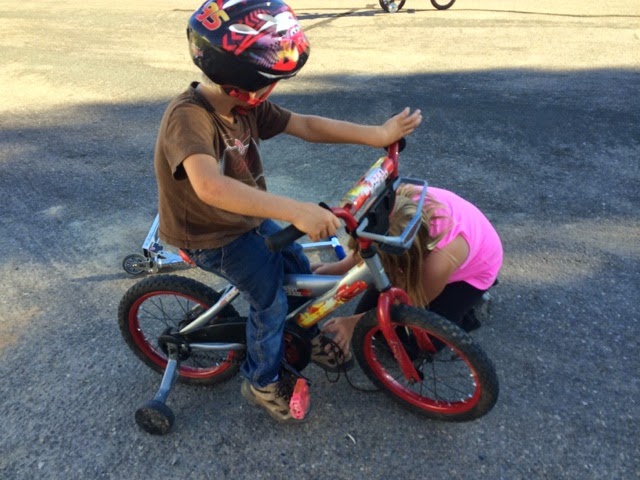 C is untangling Johnny's shoelaces from his bike pedal. Afterward he said, "Thank you, C!" and pedaled off. It's nice to see him learning manners too. ;)
Posted by Mama Durso 0 comments

Email ThisBlogThis!Share to TwitterShare to FacebookShare to Pinterest
Labels: Growing up, Johnny

When we went to Oregon for my cousin's wedding in May, my mother-in-law got the boys a special "Go Fish" deck of cards. We didn't end up playing it on the trip, but we've played it plenty of times since we got home. And it's hilarious.
Hank and Johnny don't hold the cards in their hands. Instead, they lay them flat on the table, facing up of course, and the game ends up being pretty fast since, you know, there aren't many secrets. Hank will take a look at Johnny's cards and say, "So, Johnny. Do you have a.... starfish?" And Johnny will look at his cards splayed on the table, pluck up the starfish and exclaim, "I DO! Here you go!" And both boys will be all surprised and excited. It's adorable. 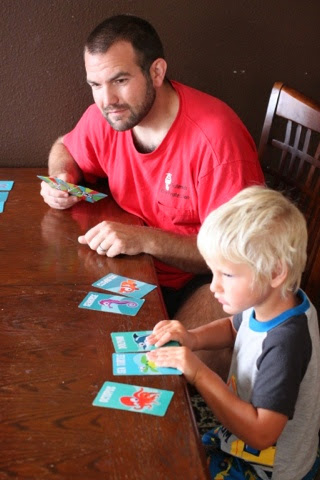 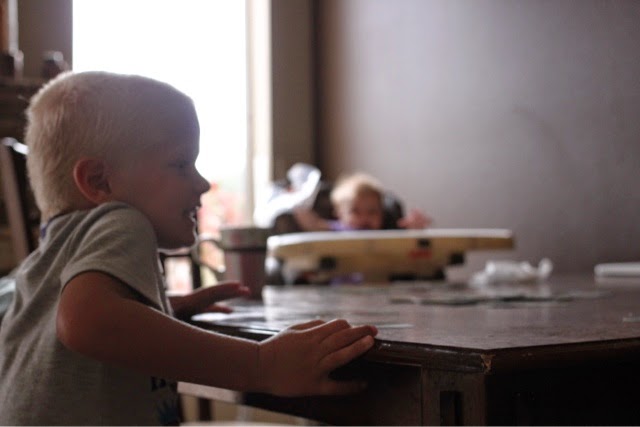 Mama Durso
I'm a high school biology teacher turned stay-at-home-mom to my two little boys, Johnny and Hank. This blog is intended to keep family and friends updated on the goings-on with our little family and as a baby book for me... because I have about four that I should be filling out and haven't yet.